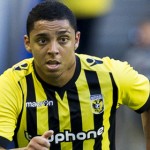 It has been reported that Chelsea defender Wallace has been arrested on suspicion of an offence in a nightclub.

The Brazilian is playing on-loan with Vitesse Arnhem this season.

The Dutch club refused to comment on the nature of the alleged offence, reports the Daily Mail.

Wallace was later released without charge.