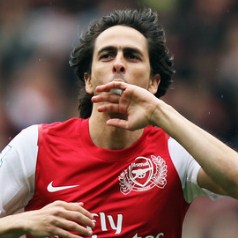 It has been revealed that Chelsea have delivered an Arsenal a deadline over Yossi Benayoun’s signing.

The Daily Mail claim that Chelsea have told London rivals Arsenal they want a decision by the end of the week on whether they plan to sign on-loan winger Benayoun on a permanent basis.

Benayoun is poised to return to the Blues in the summer having spent 12 months on loan at the Emirates, in which he scored six goals in 25 appearances for the Gunners.