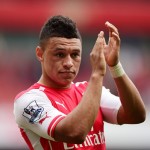 Reports are out claiming that Chelsea reportedly want Alex Oxlade-Chamberlain as part of the deal that could see Petr Cech join Arsenal.

According to the Daily Mirror, Blues boss Jose Mourinho is keen on the Gunners midfielder and could ask to have him included in any move that the north Londoners make for goalkeeper Cech.

Czech Republic international Cech, 33, is expected to leave Stamford Bridge this summer and the Emirates Stadium has been seen as the most likely destination.

However, Mourinho wants something back in return for the gloveman who has been with Chelsea since 2004 and will enquire about a cash-plus-player deal involving 21-year old Oxlade-Chamberlain.