It has been reported that Chelsea are eyeing Borussia Dortmund striker Pierre-Emerick Aubameyang. 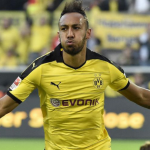 The London Evening Standard claims that Aubameyang has emerged as a leading candidate to solve Jose Mourinho’s striking problems in January.

Names like Harry Kane and Antoine Griezmann have been tossed around, while Emmanuel Adebayor and Robin van Persie have been suggested as short-term solutions to Chelsea’s offensive problems.

Pierre-Emerick Aubameyang is also linked with a move to Arsenal.