It has been reported that Chelsea boss Jose Mourinho wants a reunion with Real Madrid defender Raphael Varane. 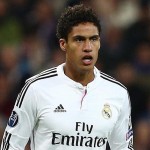 The French international was convinced to move to Real ahead of Manchester United three years ago by Mourinho.

Varane penned new terms with Real last year, but the London Evening Standard says Chelsea plan to bid this summer for the defender.

The 21-year-old has continued to be a fringe member of the Real team, starting just seven La Liga matches.