Sensational transfer news are out claiming that Chelsea are exploring a deal for Anzhi Makhachkala striker Samuel Eto’o. 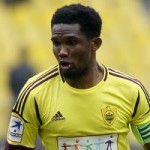 The Daily Mail reported that the Blues are on the lookout for a striker, with Manchester United’s Wayne Rooney number one on manager Jose Mourinho’s wanted list.

The Cameroon international won the Champions League in 2010 while playing under Mourinho at Inter Milan and earlier this week the 32 year old admitted his admiration for the Chelsea boss.

He said: “There is only one Jose Mourinho. I have played under a lot of great coaches – but there is no other character in the game like Jose.

“He is one of the best coaches in the world – and we had a lot of success together at Inter Milan. I would like to have the chance to play under him again – because it is never boring when Jose is around.

“Of course Chelsea are a great team – and when we have all the offers on the table then I will discuss with my agent and see what my next step is.”