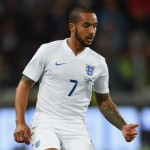 Reports have emerged claiming that Chelsea are keeping tabs on Theo Walcott’s situation at Arsenal.

The Times reported that Chelsea are keeping a close eye on Walcott’s contract situation at Arsenal and may attempt to sign him this summer.

Walcott will have one year left on his current deal at the end of the season and, according to the report, would prefer to stay at Arsenal.

His signing would help Chelsea increase their number of home-grown players in the wake of Ashley Cole and Frank Lampard’s departures from Stamford Bridge.