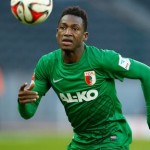 Reports are out claiming that FC Augsburg’s Baba Rahman is a reported target for Chelsea.

L’Equipe reports that Blues boss Jose Mourinho has been impressed by the 20-year old full-back this season.

11-time Ghana international Rahman has made 28 Bundesliga appearances for Augsburg this term and would fetch a transfer fee of around £11million according to the French newspaper.

It is believed that Manchester City are also keen on Rahman who joined Augsburg from German second division club Greuther Furth last summer.