Reports are out claiming that Chelsea are eyeing Porto midfielder Yacine Brahimi. 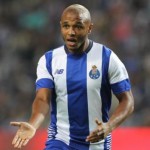 The Blues are expected to splash out during the winter market after a dismal start to the season.

Brahimi is high on the agenda and his €60 million buyout clause isn’t putting off Chelsea directors.

The midfielder has also attracted serious interest from Manchester City. Yaya Toure Eager To End His Career At Manchester City