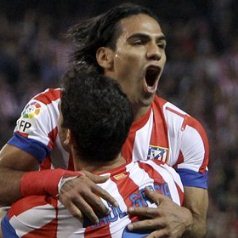 The Colombian international striker put on a show for the watching Roberto Mancini as he guided his Atletico Madrid side to a thrilling 2-1 win over Malaga and a share of the Primera Division lead.

On a night when Lionel Messi and Cristiano Ronaldo proved their undeniable worth with braces in the Clasico, Falcao proved he has a game that can rival the pair of them at Vicente Calderon.

Whether Manchester City boss Mancini was there to watch the 26 year old or not, he will surely not have failed to notice another all-action display from the former Porto man.