Chelsea Fans Told Me ‘We Don’t Want You!’ – Jose Mourinho

Jose Mourinho has admitted that Chelsea fans told him to his face they did not want him to join back in 2004. 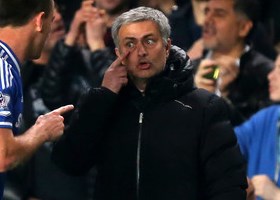 Prior to him joining the Blues, he was actually told he wasn’t wanted at Stamford Bridge.

Amid rumours he was being lined up to replace popular boss Claudio Ranieri he was confronted by a pair of angry fans.

“I came to Stamford Bridge to watch Chelsea v Monaco, and there were already lots of rumours I would be the next manager,” he told chelseapitchowners.com.

“I was walking in front of the Chelsea hotel, going to the stand to get my ticket and two people came to me and were telling me, ‘We don’t want you here, we love Ranieri’.

“And my assistant said to me, ‘We’ve got big problems’. I said, ‘No, the fans are good, they support their manager and probably one day it will happen the same with us’.”