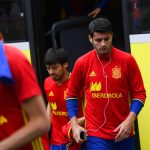 Reports have emerged claiming that Chelsea have jumped to the front of the race for Juventus striker Alvaro Morata.

AS says Chelsea are now leading the chase for the signature of Morata, who looks in line to depart Juve this summer.

With Antonio Conte taking over as Blues manager, a transfer to the West London side is thought to be an option that appeals to the former Real Madrid man.

Conte was a major driving force behind Morata’s switch to Turin in 2014, despite resigning as Bianconeri boss shortly before the 23-year-old’s arrival at the club.

Morata’s future is set to be decided by Real, which hold a buy-back option for the striker.

The clause, which Los Merengues can activate between 1 and 15 July, allows them to re-sign Morata for 30 million euros, with the Champions League winners then expected to sell him on at a profit.

Arsenal and Manchester United are also said to be keen on the Spanish international star.

Cesc Fabregas : I Didn’t Quit Arsenal Because I Was Unhappy!