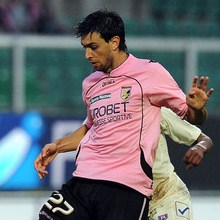 Reports have surfaced that Chelsea are regarded as favourites for Palermo star Javier Pastore.

Blues boss Andre Villas-Boas is in the market for a midfield schemer and with Palermo demanding only cash for Pastore, Chelsea are in the right position to land the Argentine.

Sky Sport Italia has reported that AC Milan are still in the running, but the Stamford Bridge side have the upper hand.

Zamparini told the Gazzetta dello Sport : “I cannot say who has the advantage between Chelsea, Manchester City or Roma. I can only underline that I’m interested in cash deals,”.

“We are at the final stages and will evaluate the offers on Tuesday. When we see which the real proposals are, then we can go forward.”