It has been reported that Chelsea are rated as favourites to sign PSV Eindhoven winger Zakaria Bakkali. 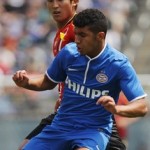 The Daily Star Sunday reported that the Belgian international has been heavily linked with a move away from the Philips Stadion in recent months, and according to reports, Premier League giants Chelsea and Liverpool are interested in landing the winger.

Those reports suggest that both Jose Mourinho and Brendan Rodgers are eager to sign the 18-year-old in the January transfer window.

But it seems that Reds boss Rodgers is loosing the race to sign the youngster, who has been dubbed the new Eden Hazard.

Sources in Spain claim that Chelsea are closing in on the coveted winger, who has attracted interest from a host of Europe’s top clubs. Jose Mourinho Not Expecting Early Business In The Transfer Market