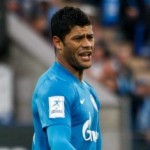 Chelsea will be hoping to offload Fernando Torres in the summer and replace him with Zenit St Petersburg’s forward Hulk.

The powerful forward has struggled to adjust to Russian football since joining Zenit St Petersburg from Porto last summer for £39m.

The Blues look increasingly likely to let Fernando Torres leave Stamford Bridge at the end of the season, following his lacklustre form in front of goal.

And Hulk could fit the bill, despite his hefty transfer clause.

Reports in Spain indicate that Jose Mourinho may urge Hulk to join Chelsea’s revolution if he is granted a second spell at Stamford Bridge.

Chelsea’s grandiose summer plans coincide with reports that Mourinho may also try to convince Sami Khedira to follow him to west London.

Hulk has netted just nine times in 25 appearances for Zenit this season.