Reports are out claiming that Didier Drogba has played down suggestions of an emotional return to Marseille. 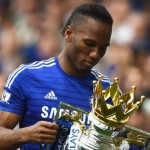 The Ivory Coast veteran is a free agent after leaving Premier League champions Chelsea earlier this summer and his next club is yet to be decided.

37-year old Drogba has often been asked about a possible comeback to Marseille, where he scored a remarkable 32 goals in 55 appearances back in 2003/04, but he has rubbished those claims by saying the French club lack direction.

“They have sold their best players, whom they let go till the end of their contracts. I’m talking about Andre Ayew, Andre-Pierre Gignac… and they’ll lose more.

“I don’t want to go to Marseille to just play. If I go somewhere, it’s to win, and I want to win. The question has been coming up for 10 years.”