It has been reported that Chelsea’s pursuit of Cagliari midfielder Godfred Donsah has reached an advanced stage, with the Premier League champions preparing a formal offer for the 19-year-old. 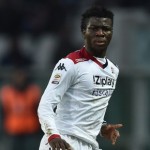 Donsah has also attracted the attention of Tottenham and Arsenal this summer, but The Metro is reporting his most likely destination now appears to be Stamford Bridge.

It is understood Cagliari have placed a £10million price tag on the Ghanaian as negotiations with Chelsea continue.

Petr Cech to be sidelined for three weeks!