Reports are out claiming that Chelsea have made contact with Mino Raiola about Juventus midfielder Paul Pogba. 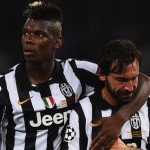 Sky Italia reported that Chelsea have sounded out super agent Raiola this week for the former Manchester United junior.

It’s suggested Chelsea have been stunned by the demands of Pogba, which include a €10 million salary, plus 20 per cent of any sell on fee.

Barcelona presidential candidate Joan Laporta is also in contact with Raiola about Pogba being part of his July 18 ticket.