Reports are out claiming that Chelsea are in tough negotiations with Frank Lampard over a new contract. 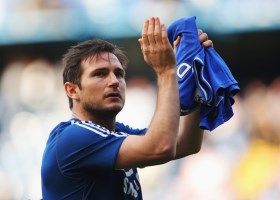 The Daily Mail says though Jose Mourinho wants Lampard to stay next season, the financial package for the midfield star is out of his control.

Chelsea would like the England international to take a substantial cut on his £150,000-a-week wage.

They had hoped to tie up his contract at the same time as John Terry, but the latter agreed his new financial terms this week.