Reports are out claiming that Borussia Dortmund defender Matthias Ginter is interesting Chelsea. 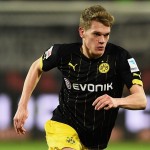 TMW reported that his impressive displays this season have attracted the interest of Chelsea and Juventus.

Dortmund are believed to want £13million for the full-back but a move is unlikely to be considered until the summer.

Ginter can also offer versatility with the youngster being able to play at both the right-back and centre-back positions.

The 22 year old German international was previously linked with Arsenal and Manchester United.