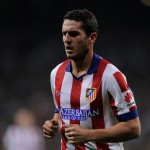 The London Evening Standard reported that he intends to use Filipe Luis as part of a swap offer for Koke.

It is said that Mourinho is a huge admirer of Koke and Chelsea made an enquiry for his services before the 23-year-old signed a new five-year deal at Atletico 10 months ago.

However the contract extension and the £48m release clause included within it, will not put Chelsea off from seeing whether a transfer can be done this summer instead. Andre Villas-Boas Delighted With The Capture Of Gary Cahill