Reports are out claiming that Chelsea are eyeing Real Madrid defender Dani Carvajal. 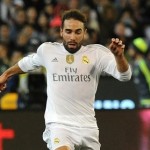 Blues boss Jose Mourinho is in the market for a new right-back as he ponders the future of veteran Branislav Ivanovic.

Bernabeu Digital says Carvajal is among the options being considered by Mourinho.

The Blues manager is a big fan of Carvajal, having worked with him at Real ahead of encouraging the fullback to move out on-loan to accelerate his development.

Carvajal’s long-term future at Real is in doubt after the summer arrival of Danilo from Porto.

Kaka : I Never Lied About My Injury To Real Madrid!