Reports are out claiming that Chelsea are chasing Napoli star Faouzi Ghoulam. 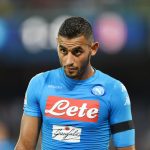 Le Buteur reported that Chelsea had a £24m swoop for Napoli star Ghoulam snubbed in the summer.

But the Blues are ready to try their luck again in January.

Antonio Conte is expected to bolster his defensive options in January as Chelsea push for title glory.

He has already drafted in Marcos Alonso and David Luiz but the Blues still need reinforcements.