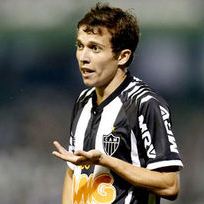 It has been revealed that Chelsea have identified Frank Lampard’s replacement.

The Sun claim that Chelsea are keeping tabs on Brazilian midfield star Bernard.

The 20-year-old, dubbed the new Oscar, is valued at £6million by Atletico Mineiro.

Bernard — who made his Brazil debut last week — was recommended to the European champions by former Blues striker Deco after a series of eye-catching performances.

He is being touted as a possible successor to Frank Lampard.