It has been reported that Chelsea goalkeeper Thibaut Courtois admits he’s received tips from Petr Cech about protecting his head in the English game. 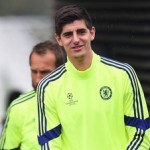 The Belgium international goalkeeper was forced off after clashing with Arsenal’s Alexis Sanchez two weeks ago and Cech, who required emergency surgery after fracturing his skull at Reading in 2006 and still wears a headguard as a result, was keen to share his expertise on the subject.

He said: “He told me that in the Premier League, maybe some strikers really go in against the keepers, so sometimes it is better to protect your head, to go down quicker and with your back or your shoulder protecting your head.

“That was a tip he gave me and it’s good because, when you come into a new league sometimes things are different.

“In Spain there is more organisation, maybe more football, while here maybe some teams are going quicker with the long ball and rushing it to the front.

“It’s maybe more physical here and maybe the referees don’t whistle as quick as they do in Spain.”