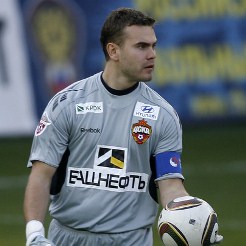 Reports have emerged that Chelsea are seriously weighing up a move for CSKA Moscow goalkeeper Igor Akinfeev.

The Daily Mail revealed that the Russia international was on their radar 18 months ago when Petr Cech was struggling to recover his form after fracturing his skull.

They signed teenage Belgian Thibaut Courtois in the summer but experienced 25-year-old Akifeev is back in the reckoning with doubts resurfacing over Cech’s long-term role as No 1.

Akinfeev, who was also watched by Manchester United, is battling back to fitness after a bad knee injury but he is eager to regain his place in Russia’s squad for Euro 2012.