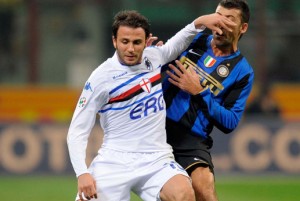 Interesting news are out and it has been reported that Premier League giants Chelsea FC are following Sampdoria striker Giampaolo Pazzini.

It has been reported that Chelsea are considering a move for the 25-year-old Italian, who joined Sampdoria in January this year.

Pazzini has impressed hugely during his time in Genoa, with 19 league goals to his name, and Arsenal boss Arsene Wenger is also said to be keeping tabs on him.

According to local media reports, Chelsea chief Frank Arnesen was in Italy on Saturday to see Pazzini in action against Genoa.