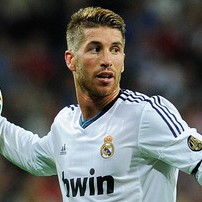 Sensational news are out claiming that Chelsea have launched a £40 million bid for Real Madrid defender Sergio Ramos.

According to El Mundo Deportivo, the Spanish international defender has decided he wants to leave Real after a blow-up with coach Jose Mourinho.

The defender’s brother and agent, Rene Ramos, has already been in contact with several interested clubs, including Chelsea.

And its emerged that Chelsea are prepared to buy Ramos NOW – in January – and not wait until the end of the season for the Spain international.