It has been revealed that Chelsea are reportedly preparing a last-minute bid for Barcelona forward Pedro. 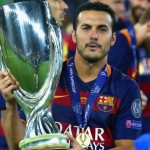 The 27-year-old has been heavily linked with a move to Manchester United this summer, but Chelsea’s late interest may throw a spanner in the works.

The Daily Mail is reporting Old Trafford is still the Spaniard’s most likely destination however, with Red Devils executive vice-chairman Ed Wo0dward in Catalonia to finalise a deal.

But it is believed that the longer United take to iron out the details of Pedro’s proposed £22million move, the more the door opens for Chelsea to swoop in and snatch the World Cup and Champions League winner from under the noses of their Premier League rivals.