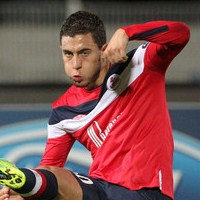 Reports have surfaced that Chelsea are favourites to land Lille star Eden Hazard.

The Sunday Express reported that the Premier League giants have emerged as favourites – among English clubs at any rate – to land the brilliant Belgian midfielder now that French champions Lille appear to have resigned themselves to losing the wonder boy they have nurtured since he was 16.

Lille president Michel Seydoux last night signalled the start of a Europe-wide auction that could top £40million by admitting the search for Hazard’s replacement had begun.

And the 20-year-old’s academy mentor Jean-Michel Vandamme revealed: “Chelsea has been following him the closest.”

Hazard, who will be 21 in January, is just the sort of uninhibited young talent Chelsea’s Andre Villas-Boas is looking for – especially if he is forced to give up on luring Luka Modric from Tottenham.

But he will face fierce competition from Real Madrid, Barcelona, Paris St Germain and Inter Milan. Vandamme said all those clubs were tracking Hazard, whose sensational 2010-11 season has made him Europe’s most wanted player.

Eric Abidal : Theo Walcott Is Not A Threat To Barcelona