It has been reported that Chelsea legend Ruud Gullit says Manchester United need to find a recognised striker. 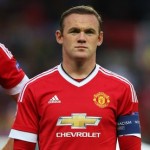 Gullit believes Wayne Rooney is being played out of position by United manager Louis van Gaal.

“You can see that the team has no real striker. Rooney? He is not a real striker,” said the Dutchman.

“Rooney must be involved in the game, he is not the man who has to stand on his own up front.

“He works hard, a lack of commitment you can never blame him for, but he is constantly searching.”