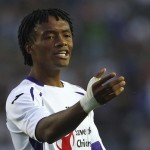 Reports are out claiming that Chelsea are chasing Fiorentina wing-back Juan Cuadrado.

The Daily Star reported that Chelsea are weighing up a shock January move for Manchester United target Cuadrado.

Blues boss Jose Mourinho, according to Italian journalist Gianluca Di Marzio, is a huge admirer of the Fiorentina winger and is understood to have been keeping tabs on him since returning to Stamford Bridge in 2013.

Colombia star Cuadrado was one of the standout performers during last summer’s World Cup in Brazil, helping his country reach the quarter-final stage.

New United boss Louis van Gaal was keen to bring him to Old Trafford following the finals and held talks with the 26-year-old’s representatives over a move to Manchester.

Cuadrado, however, decided against a switch to United and, in October, signed a new five-year deal to stay at Fiorentina. Although, as part of that deal, a £26.8m buy-out fee was inserted into the terms of his new contract.