Reports have emerged claiming that Chelsea’s Jose Mourinho is hoping to pull off a summer swoop of Real Madrid midfielder Sami Khedira. 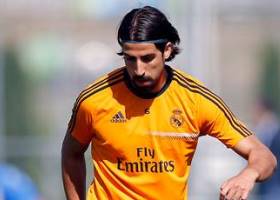 A number of reports are suggesting that the Blues boss is targeting his former Real star in a mooted £35million transfer.

The 27 year old German international has featured just 15 times under Carlo Ancelotti this season although a lot of his absence was due to a knee injury sustained in November.

Nevertheless, it appears as though the other central midfield role at Madrid has gone to Luka Modric, who has formed a healthy partnership with Xabi Alonso, which has prompted suggestions that Khedira could be on the move at the end of the season.

The former Stuttgart star starred under Mourinho at the Santiago Bernabeu and it is being widely reported that perhaps the pair could reunite at Stamford Bridge after the World Cup for which Khedira is hoping to be fit.