Reports are out claiming that Inter Milan are willing to offload Geoffrey Kondogbia in January. 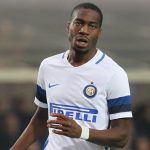 The France international midfielder has battled for minutes this season and his availability has been circulated across Europe.

Liverpool and Chelsea are among mooted destinations as Inter’s demands emerge.

Gazzetta dello Sport says Inter are willing to loan Kondogbia with the view to an outright sale worth €20-22 million.

The midfielder’s agents, however, are insisting Inter only consider offers from clubs of similar status.