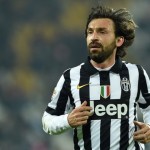 Reports are out claiming that Chelsea and Liverpool are monitoring Andrea Pirlo’s situation at Juventus.

Pirlo revealed that he’ll leave Juve if they win the Champions League.

“Ending my Juventus story by pocketing the Champions League would be a dream come true,” he said.

“But I won’t stop playing, I’ll go on as long as I have the same great desire to keep training every day.”

Tuttosport says Chelsea and Liverpool have contacted Juventus over a possible transfer this summer.