Reports are out claiming that Chelsea have reportedly opened discussions with Real Madrid about bringing defender Dani Carvajal to Stamford Bridge. 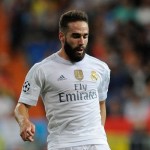 Spanish publication Fichajes is reporting Carvajal has become disillusioned with a lack of first team action at the Santiago Bernabeu, with Madrid manager Zinedine Zidane opting to play Danilo ahead of him in the right fullback position.

Blues manager Guus Hiddink is understood to be eager to strengthen his defensive unit with the 24-year-old Spaniard, who has four years remaining on his deal with Los Blancos.

It is believed Madrid may be reluctant to sanction a move, but must also consider the consequences of keeping an unhappy player who has started just eight matches this season on their books.