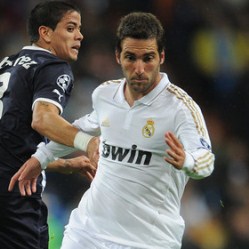 Reports have emerged that Chelsea are in talks with Real Madrid for striker Gonzalo Higuain.

The Daily Express revealed that the Premier League side were last night locked in talks with Real Madrid over a £25million move for the Argentine international star.

After the disastrous 3-1 defeat by Aston Villa on New Year’s Eve that ended any hopes of the title for Roman Abramovich’s club, the Russian owner has stepped up efforts to back under pressure manager Andre Villas-Boas with squad reinforcements.

Higuain was offered to Chelsea before Christmas, with Real keen on bringing Napoli striker Edison Cavani to the Bernabeu. But Chelsea want to bring the price down.