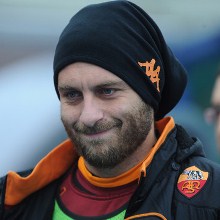 Chelsea have discussed the possibility of bringing Italy midfielder Daniele De Rossi to the Premier League this summer.

With Jose Mourinho all but confirmed as the new Chelsea manager, the Blues have begun preparations for new signings at the club.

Mourinho is a big fan of the all-action Roma star, who will be allowed to leave the Italian capital after a troubled season.

Roma president James Palotta and general manager Franco Baldini were reportedly in London yesterday to discuss the potential sale of the De Rossi to Chelsea.

Carlo Ancelotti – expected to replace Mourinho at Real Madrid – also wants to sign the 29-year-old but the Spanish giants are said to have other targets in mind, principally Tottenham’s Gareth Bale and Liverpool striker Luis Suarez.