Reports are out claiming that Chelsea boss Jose Mourinho is making a late move for Arsenal target Sami Khedira. 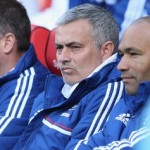 The Daily Star reported that the German international midfielder is available for £20m with Real Madrid ready to cash in after being unable to thrash out terms to extend the 27-year-old midfielder’s contract beyond next summer.

And while Arsenal are ready to match that asking price, their unwillingness to offer a wage package which would eclipse top earners Mezut Ozil and new signing Alexis Sanchez has offered Chelsea a glimmer of hope.

Boss Mourinho is understood to have made a personal call to Khedira following Germany’s extra-time win over Argentina to try and persuade him to sign for him for a second time.

But while Arsenal boss Arsene Wenger face a fight to convince Khedira to lower his wage demands to a more manageable £150,000-a-week, Chelsea have issues of their own regarding his capture.

Offering more attractive personal terms would not represent a problem.

But Mourinho knows he must offload players if he is to continue restructuring his midfield.