Interesting transfer news are out claiming that Real Madrid are ready to sell Sergio Ramos at the end of the season. 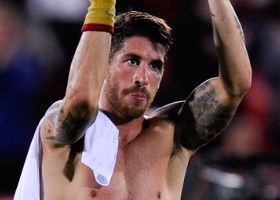 The Daily Mail revealed that the Spanish international defender will be available to Chelsea or Manchester City at the end of the season after fall-outs with Real Madrid president Florentino Perez and coach Carlo Ancelotti.

Both Jose Mourinho and Manuel Pellegrini have worked with Ramos before at Madrid and both want to sign a new central defender in the summer.

Ramos fell out with Mourinho in Spain but away from the soap opera environment of Madrid, Mourinho believes the two could work together. Pedro Happy With Decision To Swap Barcelona For Chelsea