Reports are out claiming that Palermo striker Paulo Dybala is the subject of enquiries a trio of Premier League clubs. 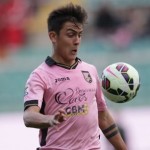 It is believed that Arsenal, Manchester City and Chelsea have all asked about the availability of the 22-year old Argentine who has scored 12 goals in Italy’s top flight this season.

Palermo president Mauro Zamparini also suggested that attacking midfielder Franco Vazquez is also on the radar of the English sides while Juventus, Barcelona and Paris Saint-Germain are also circling for the pair.

“Dybala and Vazquez will probably be sold this summer. Will they go to Milan? No,” said Zamparini.

“They are being tracked by Juventus, Arsenal, Barcelona, Manchester City, Chelsea and Paris Saint-Germain.”