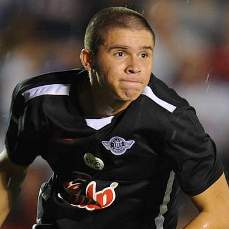 Reports are out claiming that Manchester City and Chelsea are being encouraged to bid for Libertad striker Mauro Caballero.

The player’s father, also named Mauro Caballero, admits his son has received one concrete proposal ahead of the January transfer window but insists nothing has been decided.

Caballero Sr told Radio Cardinal AM: “The future of Mauro points to Europe. There is one great option for January but we cannot confirm anything yet.”