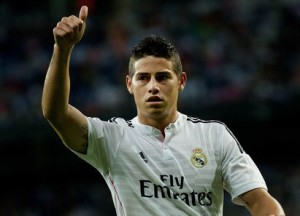 Chelsea has joined in the race to sign perennial bench warmer James Rodriguez from Real Madrid, Man Utd has long been linked with the Colombian, however, Chelsea is hoping to tempt the player to join the London based club.

He’s never nailed down a spot in the starting XI for Los Blancos since arriving in 2014 off the back of an incredible set of performances for Colombia in the World Cup.

And now, as he looks to increase his minutes ahead of next summer’s tournament in Russia, he’s expected to leave Real Madrid and find a new home for the 2016/17 season.

Man Utd are 4/1 to bring the winger to Manchester, but Chelsea are just behind them at 5/1, but that figure could change if Eden Hazard is persuaded to quit Stamford Bridge for a move to Real Madrid, who are looking to sign the Belgian star.

The attacking midfielder is 6/1 to remain with his current side.

Zinedine Zidane’s side are thought to be keen on getting Rodriguez away from the Bernabeu for a decent fee as they look to conduct their own summer signings.

As well as Hazard, they’ve also been linked with Monaco teen sensation Kylian Mbappe, who could cost over £100m to prise away from Stade Louis II.