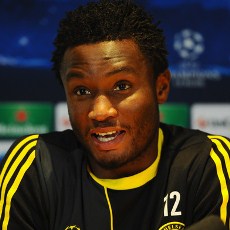 John Obi Mikel has received a three-match ban stemming from his involvement in a clash with referee Mark Clattenburg on October 28.

The Chelsea midfielder has been suspended for three games and fined £60,000 for ‘using threatening and/or abusive and/or insulting words and/or behaviour’ in the aftermath of the Blues’ loss to Manchester United at Stamford Bridge.

Clattenburg was accused of using racist language toward Mikel but was later cleared and now the player is the one who has been punished by the football association.

“Chelsea’s John Obi Mikel has been given a three-match suspension to begin with immediate effect and fined £60,000 following an Independent Regulatory Commission hearing today [Thursday 6 December 2012],” read a statement on the FA’s official website.

“Mikel had requested a personal hearing after admitting an FA charge of using threatening and/or abusive and/or insulting words and/or behaviour.

“The breach of FA Rule E3 was in relation to an incident which occurred in the match official’s changing room at the end of Chelsea’s fixture against Manchester United on 28 October 2012.

“But for that factor the suspension would have been significantly longer.

“Subsequently the FA investigated the allegation that the referee racially abused the player and found that there was not a case for him to answer.”