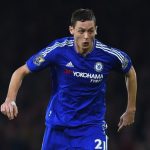 It has been revealed that Nemanja Matic has reportedly told Chelsea he fancies a move to Manchester United this summer.

The Serbian international midfielder has been linked with a possible shift to Old Trafford to reunite with Jose Mourinho and now according to The Sun, has informed the Blues he wants that to occur.

It is believed that Matic has told new Chelsea boss Antonio Conte that he is keen to follow Mourinho to Manchester after a disappointing season in West London which saw him underperform massively.

Matic has maintained a strong relationship with Mourinho since the Portuguese was sacked in December and the pair could now work together if United make a suitable offer to the West Londoners. We Can Do Much Better! – Man Utd Boss Louis van Gaal