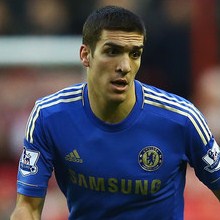 Bad news for all Chelsea fans as midfielder Oriol Romeu has been rules out for the rest of the season.

The Daily Mail revealed that Chelsea have suffered a major blow with the news that the 21 year old is unlikely to play again this season.

The Spanish U23 international suffered suspected cruciate knee ligament damage in the win over Sunderland on Saturday and was replaced after just 20 minutes.

And according to reports in Spain, he may not play again this term.