It has been reported that Brazil World Cup winner Lucio is convinced Chelsea midfielder Oscar is primed for a big tournament. 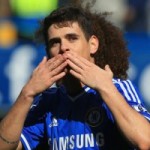 Lucio has been watching Oscar’s progress with Chelsea over the past 12 months.

The Palmeiras defender told the Guardian: “The Premier League is one of the hardest in the world with plenty of great teams like Manchester United, Manchester City, Liverpool, Chelsea and Arsenal.

“It makes the games really hard and gives great credibility to those players, a great experience. I think being used to playing at that level is very important for a World Cup.

“Chelsea is a great team and for me Oscar is the player who can make the difference in a match. He’s a very offensive player; fast, creative, skilful. He can make a difference for Brazil.”