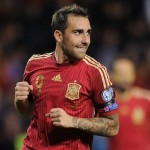 The youngster is Spain’s new striking star, having resisted interest from Liverpool and Arsenal as a junior to make his career with Los Che.

The Sun reported that Chelsea sent scouts to watch Alcácer during Valencia’s clash against Malaga.

The forward is also a member of Vicente del Bosque’s Spain squad and regarded highly inside Spanish football.

Los Che will be reluctant sellers should Chelsea firm up their interest in January.