It has been revealed that Liverpool striker Daniel Sturridge has suggested that Chelsea never believed in him. 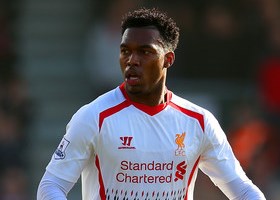 The England international has scored 24 goals in 30 Premier League appearances since arriving at Anfield from Stamford Bridge in January 2013 and has indicated that he never got the chance to achieve something similar with the Blues because he was never used as a striker.

The 24 year old told the Anfield Wrap : “I was never sure if I’d play as a striker [at Chelsea] because people didn’t believe in me,”.

“I was often asked to play in a different position and to do a job for the team but, having been a striker and then being asked to just flick a switch and play on the wing was always going to be difficult, because mentally you’re going to play the way you always have and I play on instinct.

“I think that now I’m just playing the way that I did as a kid but I’d never had the chance to do that.

“When I was playing as a winger at Chelsea I was overthinking it because I wasn’t used to doing it.

“It’s about that split second when you have to decide whether you do this or do that whereas now I’m just playing on instinct.

“I’m just doing the natural thing, playing my natural game and doing things off the cuff.

“Like the goal against Aston Villa, it happened so fast that I had to watch a video of it afterwards to see what I’d done.”