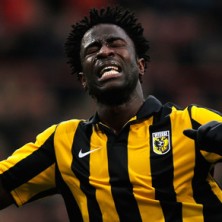 Reports are out claiming that Chelsea chief Michael Emenalo has decided to pull back from a deal for Vitesse Arnhem striker Wilfried Bony.

De Telegraaf reported that Emenalo feels that the Ivory Coast striker relies too much on his physical attributes in the Eredivisie and would find it difficult competing against Premier League defences.

It is said that Emenalo watched the 23 year old score against FC Twente last week, but feels he needs more development to be ready for Chelsea.